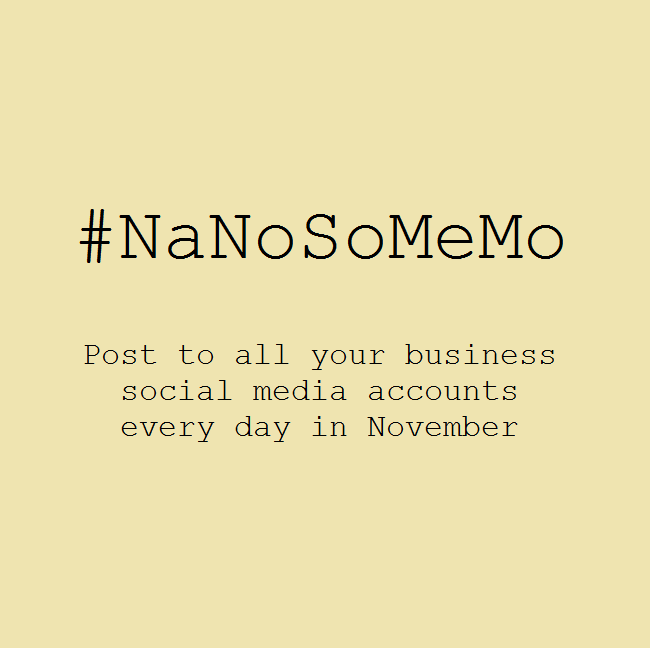 This is one of those posts that I keep starting and restarting, because I feel like the thing that I’m trying to express can easily be construed as another thing that I wholeheartedly disagree with, or an attack on people for whose work and effort I have nothing but admiration and gratitude. So I’ve decided to write this post as an interview with the imaginary person telling me why all my previous drafts are terrible.

Person In My Head: So, Amethyst, tell the seven people who will read this post what #NaNoSoMeMo is.

Me: It stands for National Novelists’ Social Media Month, and it’s really for creators in any media, not just novelists. I created it as an alternative to #NaNoWriMo for people like me who are good at prioritizing writing, but bad at prioritizing social media and networking. I’m challenging myself to update my public Facebook, Instagram, Twitter, Tumblr, and Pinterest every day for the month of November.

Me: Your face hasn’t produced a complete manuscript in three years.

PIMH: I don’t have a face. Or a mom. This is going to be fun. Anyway, a lot of people are saying it’s difficult to keep up with social media in this day and age. I’m assuming you agree, since you failed your own challenge last November.

PIMH: I know, right? Social media has gotten so negative and divisive these days! Can’t we all just forget about politics and political correctness and find common ground and focus on beautiful things like sunshine and kittens and love? And can’t we all put our phones down and start talking face to face again? No one is ever misunderstood, disagreed with, or verbally abused in face-to-face conversation.

Me: No, the problem isn’t that we’re talking about “politics” or “political correctness,” or the fact that we’re having these conversations online instead of face to face. The problem is stuff that is actually, literally, empirically, demonstrably, verifiably, objectively HAPPENING.

Me: See, that’s the problem. The fact that I can now lose an entire day on social media trying to explain to people that it is in fact possible to know what is actually, literally, empirically, demonstrably, verifiably, objectively HAPPENING.

PIMH: Okay, you’ve convinced me. So I guess you now have a sacred duty to spend your days telling everyone on the internet about all the bad things that are happening, why they’re happening, and what they should do about them. Oh, and issuing public statements that you know bad things are bad. Otherwise you’re being neutral and choosing the side of the oppressor.

Me: Which isn’t something I can sustainably do. I’ve spent a lot of this year avoiding social media because I can’t mentally handle getting involved in conversations about this stuff that is happening.

PIMH: That sounds awfully privileged. Marginalized people can’t just avoid this stuff and look at pictures of kittens. It’s stuff that affects them every day, Beckita.

Me: A lot of it is stuff that directly or indirectly affects my life, or that I can reasonably expect to affect my life in the near future. Whether or not it affects me in any way, it’s usually stuff that I don’t have the physical, mental, professional, or financial resources to help. So I put down my phone, spam Lin-Manuel Miranda’s playlist a few times in hopes that I’m generating a few pennies of financial support for victims of at least one of this year’s disasters, say a prayer, which all my atheist friends are reminding me doesn’t actually help anyone but me, chant “Our Existence Is Resistance,” and make sure my apartment and pets and self are getting the basic upkeep they need.

PIMH: Wow, that does sound stressful. Like, clinically stressful. Why are you still on social media at all?

Me: Because one does not become a successful author/artist in this day and age without having a successful social media presence.

PIMH: Ahhh, that makes sense. Well, be sure you sound sufficiently woke in your social media presence. Teenage girls who are reading about how to dress for a protest in Teen Vogue might not buy your books because of a tweet from five years ago that didn’t use a word that didn’t exist yet. But don’t sound too political. Those teenage girls’ parents might not buy your books because you expressed opinions about things ever, and you shared things about yourself that remind them people different from them exist. Oh, and don’t forget to post about your own art every now and then, because you are on social media for the primary purpose of promoting it. But if there’s anything terrible happening in the world, don’t even think about posting about your own art or about anything other than the terrible thing, because if you’re posting about anything else while something terrible is happening, not only does that mean you don’t care, it means you’re encouraging other people not to care, too. And you’ll be on the wrong side of history. You will be remembered as “Amethyst, the bitch who cared more about last night’s episode of The Good Place than fires, floods, earthquakes, police brutality, terrorism, and actual Nazis.”

Me: Or I could remember that I was taught to be honest about what I believe and who I am, and that I’m one voice among millions, and that I can be grateful for the people who are doing the hard work of keeping people informed about what’s going on in the world while acknowledging that people doing that work also need entertainment that lets them escape their troubles, and that I’ll never be able to provide that entertainment if I don’t protect my mental health.

Me: It did, didn’t it? I just may survive #NaNoSoMeMo after all.

PIMH: ALL RIGHT, FOLKS, YOU HEARD IT HERE! AMETHYST SAYS YOU SHOULD ALLLLL STOP POSTING ABOUT CURRENT EVENTS AND POST FUNNY, CUTESY CRAP INSTEAD BECAUSE SHE KNOWS WHAT’S BEST FOR EVERYONE!

PIMH: As well you should. Before we go, you mentioned that #NaNoSoMeMo is for all kinds of artists, not just novelists. Sure, that sounded nice and inclusive. But not everyone is an artist. Who are you excluding, exactly?

Me: Just one person.

Author, blogger, internet person. My claim to fame is Thalia's Musings, an indie fantasy series set in the ancient Greek pantheon and narrated by the muse of comedy. http://thaliasmusingsnovels.com/ https://amethystmarie.com/ View All Posts